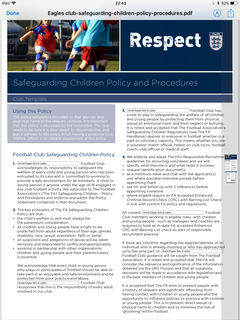 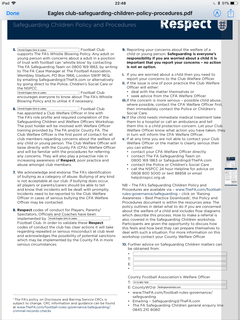 1. Arnold Eagles Football Club acknowledges its responsibility to safeguard the welfare of every child and young person who has been entrusted to its care and is committed to working toprovide a safe environment for all members. A child or young person is anyone under the age of 18 engaged in any club football activity. We subscribe to The Football Association’s (The FA) Safeguarding Children – Policy and Procedures and endorse and adopt the Policy Statement contained in that document.

2. The key principles of The FA Safeguarding Children Policy isthat:

• the child’s welfare is, and must always be, the paramount consideration

• all children and young people have a right to be protected from abuse regardless of their        age, gender, disability, race, sexual orientation, faith or belief

• working in partnership with other organisations, children and young people and their parents/carers is essential.

We acknowledge that every child or young person who plays or participates in football should be able to take part in an enjoyable and safe environment and be protected from poor practice and abuse.  Arnold Eagles Football Club recognises that this is the responsibility of every adult involved in our club.

3. Arnold Eagles Football Club has a role to play in safeguarding the welfare of all children and young people by protecting them from physical, sexual or emotional harm and from neglect or bullying.

It is noted and accepted that The Football Association’sSafeguarding Children Regulations (see The FA Handbook) applies to everyone in football whether in a paid or voluntary capacity. This means whether you are a volunteer, match official, helper on club tours, football coach, club official or medical staff.

4. We endorse and adopt The FA’s Responsible Recruitmentguidelines for recruiting volunteers and we will:

• specify what the role is and what tasks it involves

• ask for and follow up with 2 references before appointing someone

• where eligible require an FA accepted Enhanced Criminal Record Check (CRC) with Barring List Check in line with current FA policy and regulations.  All current Football Club members working in eligible roles, with children and young people - such as managers and coaches are required to hold an in-date FA accepted Enhanced CRC with Barring List check as part of responsible recruitment practice

Association. It is noted and accepted that The FA will consider the relevance and significance of the information obtained via the CRC Process and that all suitability decisions will be made in accordance with legislation and in the best interests of children and young people.  It is accepted that The FA aims to prevent people with a history of relevant and significant offending fromhaving contact with children or young people and the opportunity to influence policies or practice with children or young people. This is to prevent direct sexual or physical harm to children and to minimise the risk of ‘grooming’ within football.

5. Arnold Eagles Football Club supports The FA’s Whistle Blowing Policy. Any adult or young person with concerns about a adult in a position of trust with football can ‘whistle blow’ by contacting

The FA Safeguarding Team on 0800 169 1863, by writing to The FA Case Manager at The Football Association, Wembley Stadium, PO Box 1966, London SW1P 9EQ, by emailing [email protected] or alternatively by going direct to the Police, Children’s Social Care or the NSPCC.  Arnold EaglesFootball Club encourages everyone to know about The FA’s Whistle Blowing Policy and to utilise it if necessary.

7. We acknowledge and endorse The FA’s identification of bullying as a category of abuse. Bullying of any kind is not acceptable at our club. If bullying does occur, all players or parents/carers should be able to tell and know that incidents will be dealt with promptly.  Incidents need to be reported to the Club Welfare Officer in cases of serious bullying the CFA WelfareOfficer may be contacted.

8. Respect codes of conduct for Players, Parents/Spectators, Officials and Coaches have been implemented by Arnold Eagles Football Club. In order to validate these Respect codes of conduct the club has clear actions it will take regarding repeated or serious misconduct at club level and acknowledges the possibility of potential sanctions which may be implemented by the County FA in more serious circumstances.

9. Reporting your concerns about the welfare of a child or young person. Safeguarding is everyone’s responsibility if you are worried about a child it is important that you report your concerns – no action is not an option.

i  If you are worried about a child then you need to report your concerns to the Club Welfare Officer.

ii If the issue is one of poor practice the Club Welfare Officer will either:

• deal with the matter themselves or

them this is a child protection concern. Let your Club Welfare Officer know what action you have taken, they in turn will inform the CFA Welfare Officer.

v. If at any time you are not able to contact your Club Welfare Officer or the matter is clearly serious then you can either:

Procedures are available via – www.TheFA.com/footballrules-governance/safeguarding

10. Further advice on Safeguarding Children matters can be obtained from Club Welfare Officers:

Contact us today if you are interested in finding out more about our club either as a player, official, coach or volunteer.

Details of Data Controller are